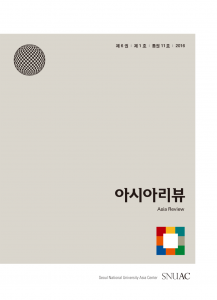 Cross-strait Marriage and the Emergence of ‘Mainland Spouse’: Focusing on the Differentiation by Migration Period – Kyungyun Moon

An Analysis on Kazakhstan Power Succession in 2019: Institutionalization of Power Duopoly – Dowon Yun

The Legacy of Soviet Union: The Balance between Islam and Nationalism, and Tardy Democratization – Jaewon Jeong