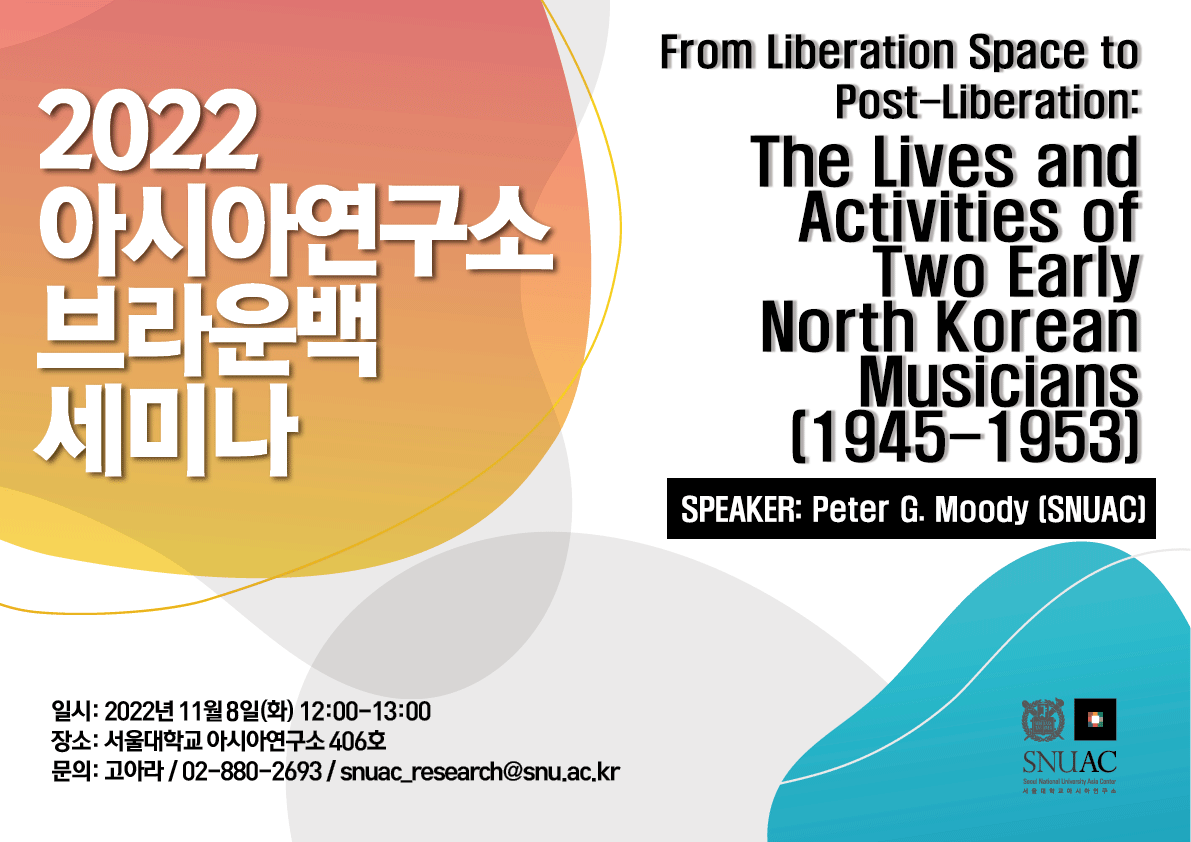 Since the early-1980s, historians and literary scholars have engaged with the concept of “liberation space” to explore the active contestation over what “liberation” actually meant in the context of the US and Soviet military occupations following the August 15th 1945 Japanese surrender. While the liberation space discourse has served to disrupt state-centric narratives and highlight the spontaneous organizational and artistic activity that did take place, it has only gone so far in accounting for the constraints that cultural figures, particularly musicians, were increasingly up against as the second half the 1940s proceeded.

This presentation will put forward a notion of “post-liberation” as a way of identifying the 1947 to 1953 period, not simply as a temporal category (as North Korean official sources do), but also as an analytical concept to sharpen our understanding of the cultural production accompanying the aftermath of the Japanese surrender. Just as “post-colonial” has described structures and forms of oppression that persist following the dismantling of a prior occupying regime, post-liberation can be said to refer to the continued creative endeavors artists pursued even as their de jure liberated status became compromised.

Applying this post-liberation lens to the field of music, this presentation will trace the compositions and writings of two North Korean musicians: Kim Sun-nam and An Ki-yŏng, both of whom migrated from the South to the North following the Japanese surrender despite having holding prominent positions in music-related institutions in Seoul initially. Their obstacles to liberation included being subject to jail time due to a prohibition of leftist political activity in the South and having their self-expression curbed under Soviet-inspired organizational activity models implemented in the North.

While the two men’s experiences diverged from each other in certain ways, both displayed an analogous form of “subservient nationalism” as they leveraged a subordinate position vis-à-vis a greater power, at least temporarily, as a means of affirming and strengthening their identities as Koreans while also pursuing their individual aims. These uneven relationships applied to their encounters with Japanese, American, and Soviet states and people, eventually giving way to the authority of the all-encompassing presence of the Korean Workers’ Party.

Peter G. Moody is a Visiting Scholar at the Seoul National University Asia Center (SNUAC) from Columbia University status and will be defending his dissertation this semester. While researching his dissertation, Peter has served in various capacities such as a Visiting Research Fellow at the Institute for Far Eastern Studies, Kyungnam University, an Adjunct Professor at the University of Maryland at Baltimore County, and a research fellow with the US Fulbright Program. His research focuses on the historical development of North Korean culture and ideology, inter-Korean relations, and North Korea’s music diplomacy in East Asia. Peter’s academic work on North Korea has been
featured in various peer-reviewed journals including Korean Studies, Korea Journal, Sungkyun Journal of East Asian Studies, and North Korean Review. He is currently in the early stages of a book manuscript entitled Mobilizing Musicians and the Making of North Korea.