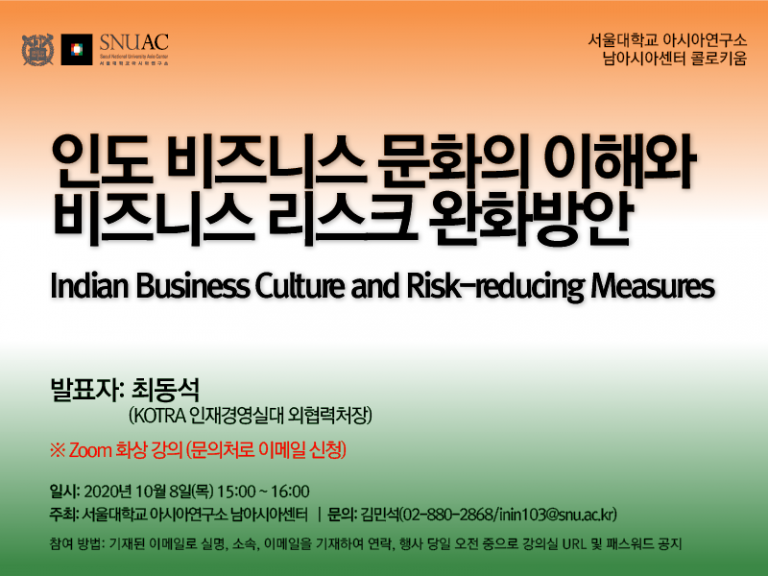 Our perception and image of India are still similar to the reproduction of Orientalism as taxidermied by past colonialism of the UK. Yet, India has the second-largest population in the world, the third biggest market in terms of purchase power, and a market where the population is the youngest and shows the most dynamic growth among major markets around the world. On the other hand, it is also a market that is the most complex, competitive, regulated, and highly influenced by government officials. Thus managers of foreign companies easily feel the paradox as they do business in India. It is because doing business in India is an enormous opportunity as well as a tough challenge. Now global corporates cannot but consider India in their business strategies. On top of India’s huge domestic market, India can be a manufacturing base or sourcing base with which corporates can enter African, Middle Eastern, and Southeast Asian markets.

India is a society where adaptation is key; even a 100-km journey would show a different culture and ethnicity. Indians feel comfortable even when there is a coexistence of seemingly contradictory worlds and ideas, and they are superior in making money while utilizing such a situation. When doing business in India, the government and the political sphere must always be considered. They have great power in harming a corporate or eliminating any obstacle in business. India’s corporate culture has similarities with politics. Dynastic leadership, complex implications, and being one step ahead of competitors. The higher the class, the more they tend to ignore the law. Managers of Indian corporates consider the founding owners the heads of large Hindu families and strive to humor them and act to their tastes. When closing important purchase contracts, Indian corporates must negotiate with the managers with prior considerations of keeping the owner-president’s face and encouraging his spirits.

India has long traded with Middle Eastern and Southeast Asian countries. Indians are entrepreneurial and always looking for business opportunities, but on the other hand from the supplier’s point of view, they are sensitive to price, hard to negotiate with, and tend to bargain with price. Recently, as competitive federalism is encouraged, competition among the 28 states has become harsh. They offer good terms to bring in foreign investment, and friendly service competition is up, in order to gradually heighten economic efficiency. Of course, in India nothing is simple. But despite that fact, if we utilize the conditions well, India’s biggest weakness can sometimes become their biggest strength. To minimize business failure in the Indian market and achieve results, we must understand the mindset, customs, and business culture of Indians to prevent errors and manage risks. Thus we can learn how to handle risk factors in trading with Indians, the Indian government, institutions, and corporates. To do this, we will examine cases of success and failure in companies from competing countries and the middle and small-sized Korean companies, in order to earn insights into how to manage risk factors. Also, we will look into the capacities and strengths of Korean corporates in India, which are highly evaluated by Korea’s competing countries like Japan.

Dong Seok Choi earned his master’s degree in public administration at SNU and finished his doctoral course on management consulting at Hanyang University and Indo-ASEAN economy at HUFS. He has served as the director in KOTRA Mumbai Office, New Delhi Office, and chief of Southwest Asia Headquarters. As he worked for 9 years in the Indian cultural sphere, he understood and sympathized with Indians and their culture and researched in the field. He strives to establish business strategies in India and set various representative projects on board so that KOTRA positions itself as a major platform in launching a business in India.

※ To participate, send an e-mail to inin103@snu.ac.kr with your name, affiliation, and e-mail address. The URL and password for the lecture will be sent on the day of the event. Please note this lecture will be given in Korean. 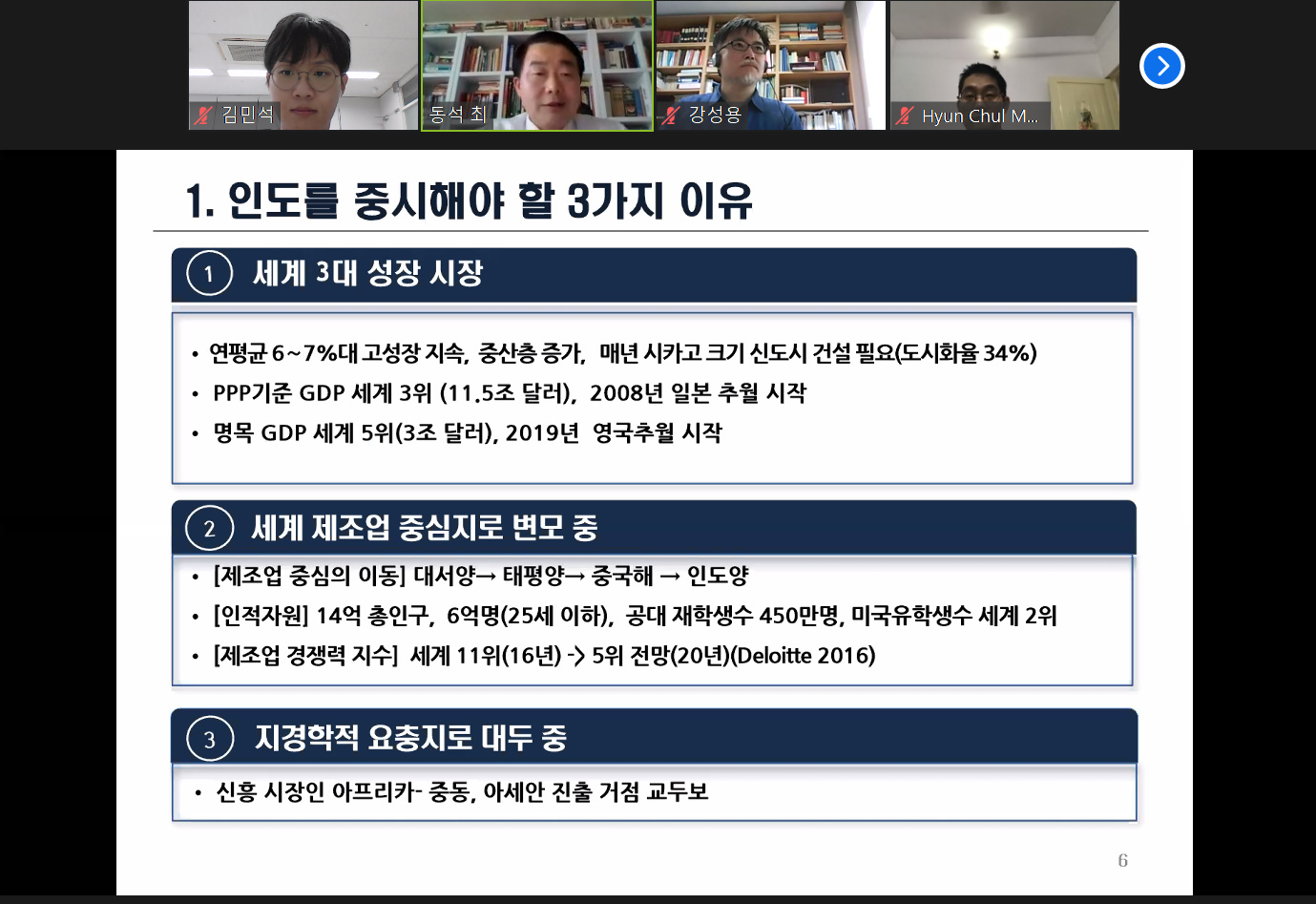 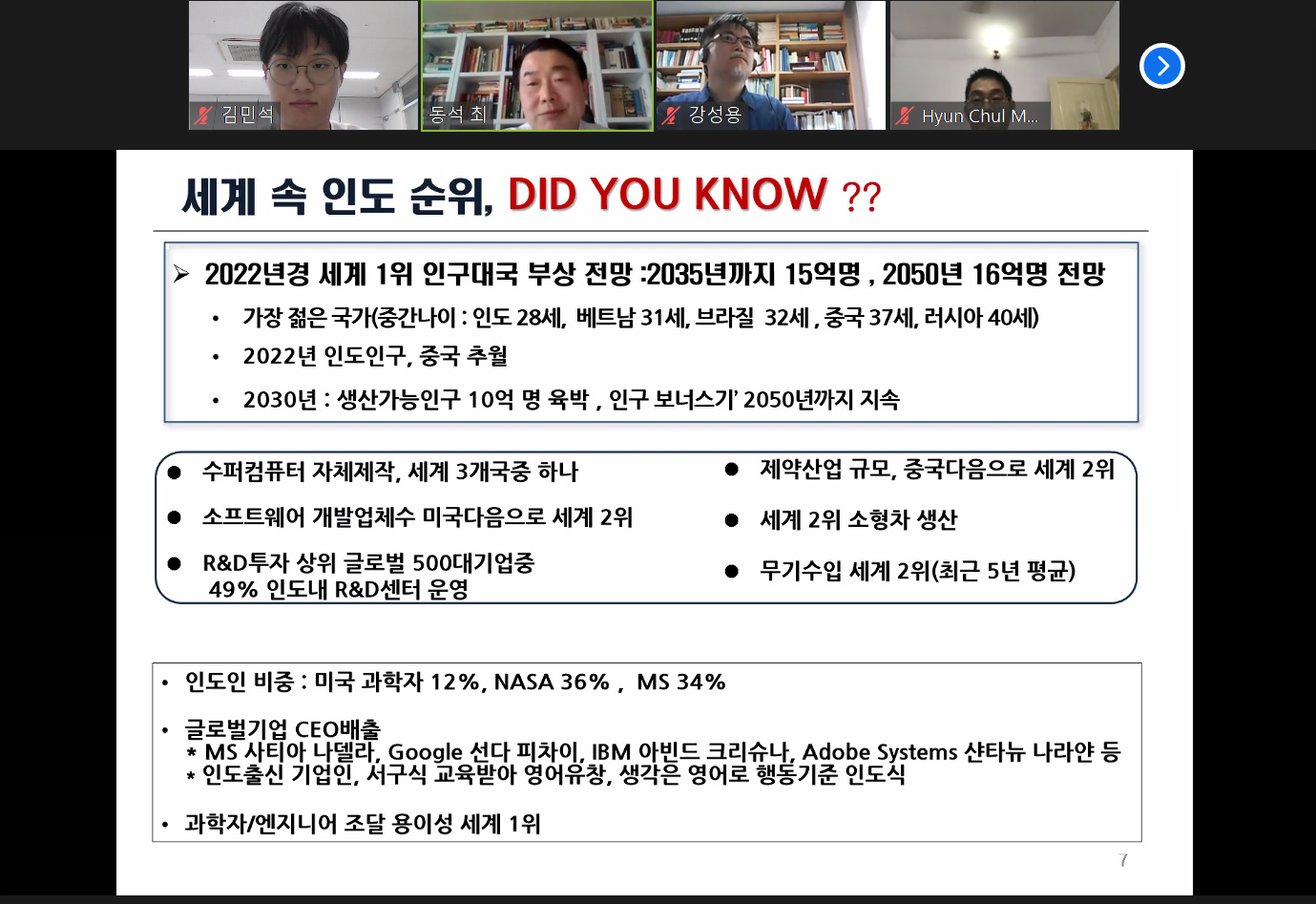 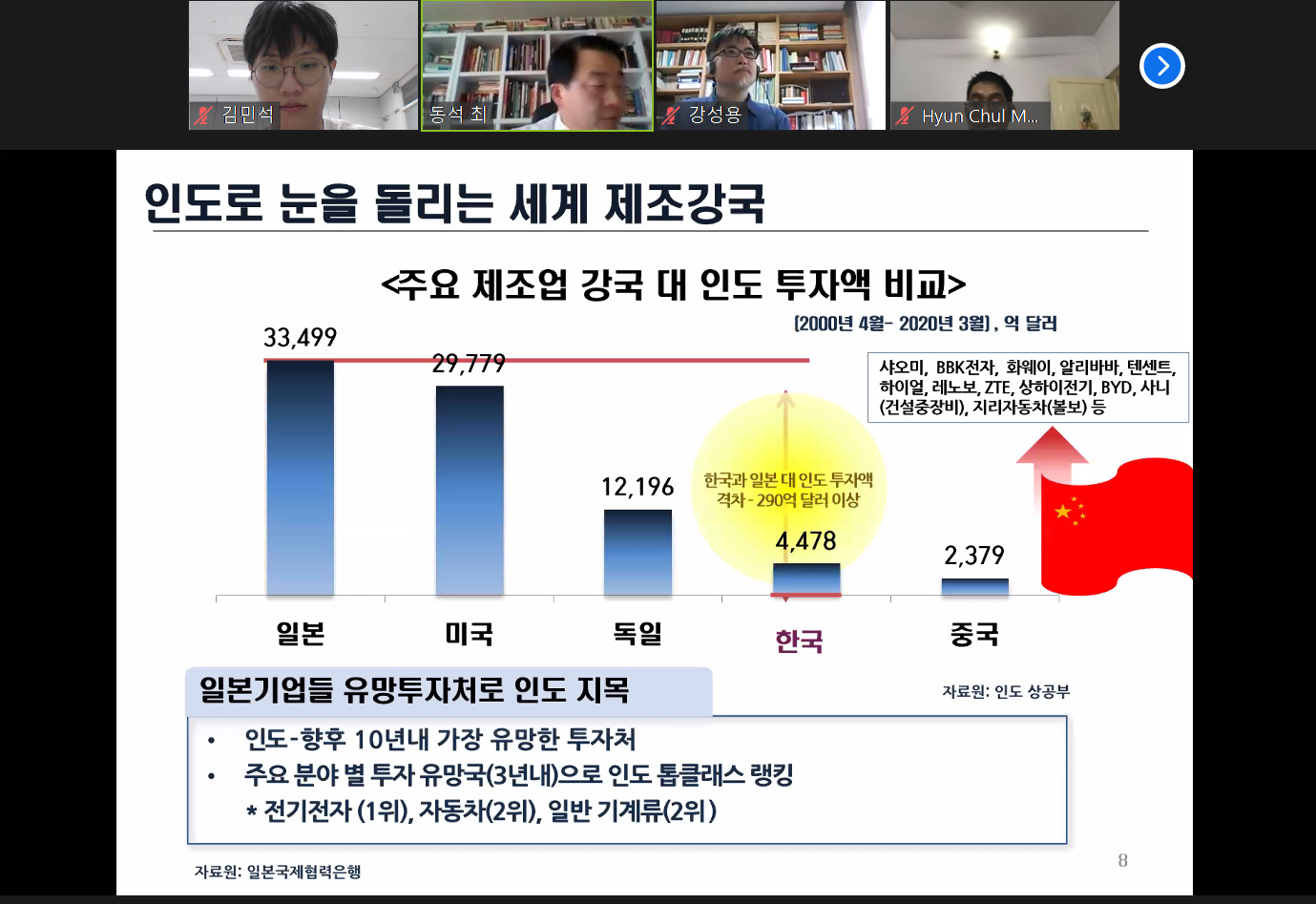 It is a well-known and unchanging fact that India is rising as a strategic point in terms of economy and geopolitics. Yet, without theoretically and practically knowing about India and its people, most companies have failed greatly in launching into the Indian market. SNUAC South Asia Center held a colloquium on ‘Indian Business Culture and Risk-reducing Measures’ with Dong Seok Choi (Director of Foreign Cooperation, Human-Resource Management Office, KOTRA) on October 8th, aiming to examine the Indian business culture and conceive business strategies in India based on his experience and knowledge from practice that cannot be grasped in theory only. Though it may generally apply to all unfamiliar cultures, it is especially crucial for us to let ourselves be absorbed into the local culture and customs instead of sticking to ideas and intuitions common to us. It is a desirable attitude not to judge or interfere with their customs when understanding and working with Indians.

On the other hand, we must take successful cases as examples when seeking the ways to actively launch into the Indian market. A common factor among successful cases was creating a close cooperative relationship with the Indian conglomerates and a tight network with public corporates in the key industries that are allocated in each region.