아시아도시사회센터 | “A tale of two industrial zones”, the Ashby prize, Environment and Planning A: Economy and Space
17215
post-template-default,single,single-post,postid-17215,single-format-standard,ajax_fade,page_not_loaded,,qode-theme-ver-16.5,qode-theme-bridge,disabled_footer_top,wpb-js-composer js-comp-ver-5.4.5,vc_responsive

“A tale of two industrial zones”, the Ashby prize, Environment and Planning A: Economy and Space

18 12월 “A tale of two industrial zones”, the Ashby prize, Environment and Planning A: Economy and Space

Posted at 14:54h in Articles, Publication by editor
Share

The editors of EPA: Economy and Space are delighted to announce that the Ashby prizes for the most innovative papers published in the journal in the calendar year 2018 have been awarded to Jinn-yuh Hsu (National Taiwan University), Dong-Wan Gimm (Seoul National University), and Jim Glassman (University of British Columbia) for their paper “A tale of two industrial zones: A geopolitical economy of differential development in Ulsan, South Korea, and Kaohsiung, Taiwan

Both papers have been made free to access for one year.

Jinn-yuh Hsu, Dong-Wan Gimm, and Jim Glassman
We are very grateful to have been recognized by the Environment and Planning A editorial board for our work on the development of Ulsan and Kaohsiung during the Cold War period. While the topic is geographical-historical, we hope that the thematic arguments we have presented will resonate beyond the specific spatio-temporal confines of our study. Certainly, as we see it, issues such as the degree to which urban development today is conditioned by geopolitical considerations remain relevant—and not just in South Korea and Taiwan, two of the enduring sites of Cold War geopolitics. We know this is a view shared by many of our East Asian colleagues, a large number of whom have helped us with the development of our arguments and our overall research projects, and who deserve recognition here. Without prejudice, and without implying anything by the order of recognition, we want to mention Bae-Gyoon Park, Young-Jin Choi, Laam Hae, Jamie Doucette, Seung-Ook Lee, Joel Wainwright, Jung Won Sonn, Szu-Yun Hsu, Ling-I Chu, and all the other participants in the 2015 International Research Roundtable at the University of British Columbia (UBC), along with all of the participants in other gatherings of the EARCAG-Geopolitical Economies (GPE) of East Asia Network, and the Social Sciences Korea project on East Asian Cities. We would also like to thank the Social Sciences and Humanities Research Council of Canada and the Peter Wall Institute for Advanced Studies at UBC for sponsoring the second GPE meeting in Vancouver, along with Jinn-yuh and Dong-Wan’s visit, and the Ministry of Science and Technology in Taiwan for sponsoring the third GPE meeting in Taipei, along with Jim’s two-week stay in Taiwan during that visit, which allowed time for more constructive dialogue among us. The camaraderie and intellectual support provided by these dynamic research networks has been crucial and energizing for all of us.

Our paper builds on work that each of us has done, within this network and individually, as part of efforts to make sense of distinctive trajectories of urbanization and development within the broader processes of East Asian social transformation. Some of that work has involved examining the general effects of military spending on urban-industrial transformation, particularly in South Korea. But we also argue that the specificities of the South Korean case—in which a remarkable amount of US military procurement during the US war in Vietnam contributed to a remarkable dynamic of heavy industry growth, with places like Ulsan at the center—can sometimes obscure the broader impact of geopolitical decision-making on development trajectories. In this sense, our argument is not a narrow claim that specific forms of military spending have contributed (say) “x” amount to growth in country “y”; rather we are arguing against economistic and reductionist accounts of development planning by showing that geopolitical considerations have played an integral role in decisions about projects for specific urban centers and regions.

The Ulsan and Kaohsiung cases are especially useful in this regard, because all analysts of East Asian developmental states agree that (a) South Korea and Taiwan seem to be parts of the same broad East Asian Cold War-era development dynamic, and (b) that the two countries nonetheless have had very distinctive patterns of economic growth and industrial transformation during the Cold War and since—with South Korea characterized more by growth dominated by heavy industry (and a developmental state devoted to spurring such growth), while Taiwan has been characterized more by the growth of electronics and other “lighter” industries (along with a state typically seen as less dirigiste). While this is terrain that has been trodden by a generation of development scholars, we believe the geopolitical factors that contributed to these differences have been underestimated and under-analyzed. We hope our arguments will contribute to a reassessment of the importance of geopolitics, and thus to the merits of a geopolitical economic approach to the study of development.

We also find the cases of Ulsan and Kaohsiung useful because they refocus attention somewhat from the national scale of development (and development planning), highlighting the fact that industrial growth in South Korea and Taiwan—as in all cases of industrial growth—has been very uneven and has favored particular locations much more than others. We show that the specific dynamics of growth in Ulsan and Kaohsiung further emphasize the importance of geopolitics, including the spatially complex (transnational/national/local) interactions of capitalist and planning elites, whose decisions helped set in motion the rapid transformations of these two cities.

This last point also brings to the fore what we think are some of the stakes in this kind of urban analysis. Simply recognizing the fact of uneven urban and regional development doesn’t necessarily get us any closer to understanding why (say) a region like Yeongnam and a city like Ulsan grow very rapidly while a region like Honam and a city like Kwangju are comparatively disadvantaged, or why (say) an export platform like Kaohsiung grows rapidly while much of rural southern Taiwan remains comparatively disadvantaged. Moreover, the mere recognition of unevenness does not help us understand why, in particular historical conjunctures, places like Kwangju or southern Taiwan become hotbeds of opposition to existing political leadership groups. The fact that geopolitical decisions about development priorities may have contributed to this by no means explains everything; but we do hope that showing some of the ways geopolitical considerations have been intertwined with development planning will help enliven debates about the politics of uneven urban and regional growth, and the reasons why even some very successful processes of growth can become highly politically contentious. 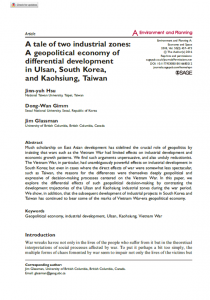